A facility of over 1500m2 to cut genset delivery times to the distribution network in neighbouring countries.

HIMOINSA, together with its distributor in Romania, All Generating, has opened a new logistics warehouse in Ilfov, Bucharest. This is a strategic geographical location, making it possible to serve markets such as Romania, Serbia, Bulgaria, Albania, Slovakia, Moldova and Croatia.

This new facility, of more than 1500m2, has a large generator storage area, meaning that the company can cut delivery times and offer a fast local service and a spare parts distribution point.

Guillermo Elum, EMEA Region Director, welcomes the opening of this facility, which “will offer lighting towers and generators with a wide power range, primarily 20 to 500kVA, as these models are the most popular in this region.” The project has been very well received by the distribution network, which from now on will benefit from greatly reduced logistics and transport costs.

"We intend to expand our maintenance services nationwide, and the new deposit offers exactly the support we need. If market evolution will be positive, we are considering increasing stock value from 500,000 euros by the end of this year to 1 million euros in 2018", said Cătălin Stanciulescu, Commercial Director All Generating.

HIMOINSA opened a subsidiary in Poland in 2004, from which it directly serves markets in Lithuania, Estonia, Latvia, Belarus and Ukraine. With the opening of this logistics warehouse, the company is stepping up its presence in Eastern Europe, where it has a major distribution network.


The project has been very well received by the distribution network, which from now on will benefit from greatly reduced logistics and transport costs.

HIMOINSA has been present on the Romanian market since 2010, among the major projects delivered being the supply of a set of generators for Transgaz, the national company responsible for gas transportation in Romania. The generator sets provide emergency power to the control centres in the handling stations, thereby preventing malfunctions in the electrical network from interrupting gas supply throughout the country and Constanta Port, where Himoinsa supplies generator sets for the cranes that load and unload the containers.

The opening was attended by HIMOINSA distributors such as Banatika from Romania, ENEL PS from Serbia, E.I. Energockom from Croatia, Global Energy from Georgia, and Habsev from Moldova, among others, giving them an opportunity to find out what competitive advantages this new project offers as well as to tour the facility. 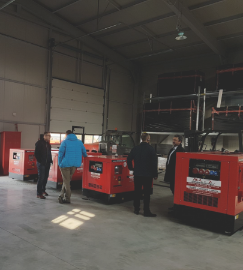